Skip to main content
News
Covid-19, vaccines and the challenge of herd immunity

Despite the unprecedented amounts of scientific data on the Coronavirus, it is still unclear what the future has in store for SARS-CoV2.

Many deemed the creation of a vaccine as the only way to fight the disease and reclaim a life of normality. So, when the first vaccine was approved in America in December 2020, the world caught its first glimpse of hope, believing that the end of the pandemic was in sight. 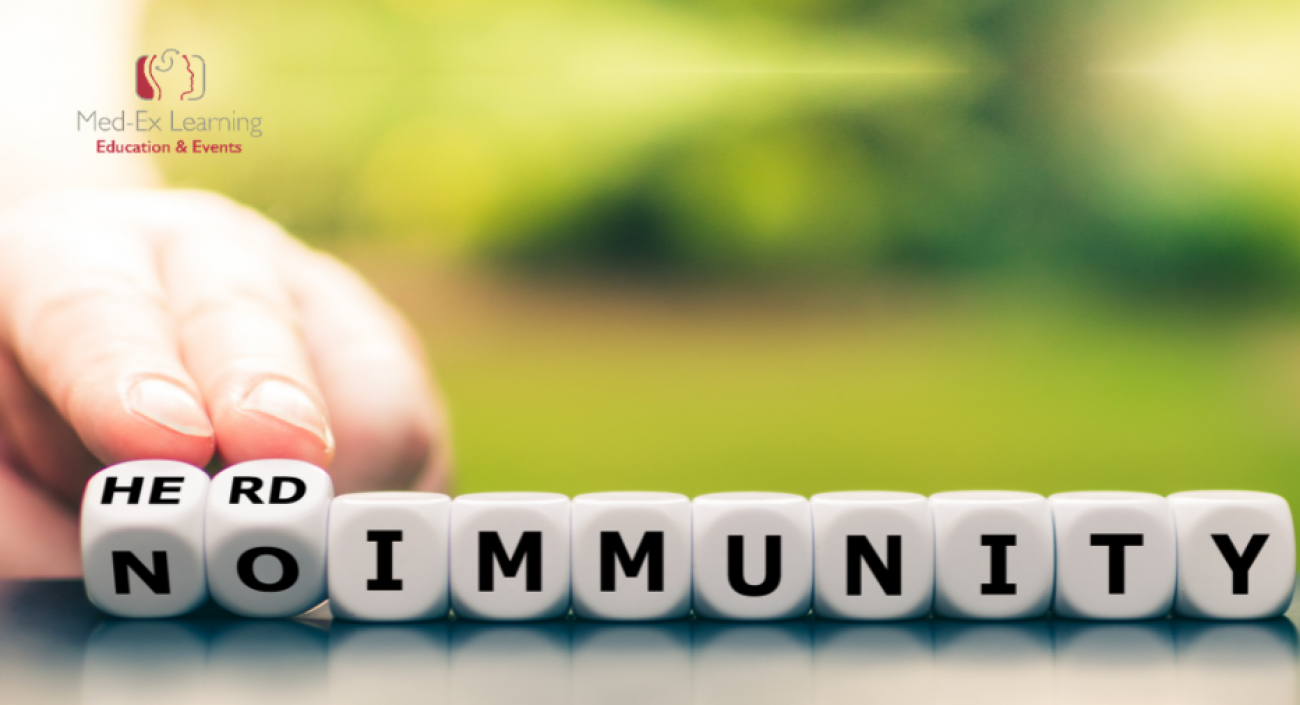 Despite the unprecedented amounts of scientific data on the Coronavirus, it is still unclear what the future has in store for SARS-CoV2.

Many deemed the creation of a vaccine as the only way to fight the disease and reclaim a life of normality. So, when the first vaccine was approved in America in December 2020, the world caught its first glimpse of hope, believing that the end of the pandemic was in sight.

On the back of this breakthrough rode a wave of optimism, and the belief that perhaps, with world-wide access to the vaccine, herd immunity would occur, finally creating a sense of safety for the international community.

However, problems stunted the efficiency of the vaccine roll-out – supply issues, public skepticism about vaccine safety, delayed production for minors, and the emergence of variant resistant strains of the virus. The glint of hope for herd immunity was starting to fade.

Independent data scientist Youyang Gu went so far as to change the name of his popular COVID-19 forecasting model from ‘Path to Herd Immunity’ to ‘Path to Normality’. Had the meaning behind ‘normality’ shifted? And had the vision of herd immunity now been excluded from this pathway to ‘normality’?

Many scientists are now proposing that COVID-19 will become an endemic disease, like a common flu. A combination of annual vaccines and acquired immunity might not overcome COVID-19, but could lead to an equilibrium where societies tolerate seasonal deaths and illnesses without requiring lockdowns, masks and social distancing. This scenario was presented by scientists interviewed by Nature on the future of SARS-CoV-2.

“Herd immunity is only relevant if we have a transmission-blocking vaccine. If we don’t, then the only way to get herd immunity in the population is to give everyone the vaccine,” says Shweta Bansal, a mathematical biologist at Georgetown University in Washington DC. “Vaccine effectiveness for halting transmission needs to be ‘pretty darn high’ for herd immunity to matter”, she says, “and at the moment, the data aren’t conclusive.”

Although Bansal agrees that data from Pfizer and Moderna is encouraging, she remains cautious. “Exactly how well these and other vaccines stop people from transmitting the virus will have big implications”.

“Pretty darn high” doesn’t have to be 100% to stop virus transmission,” says Samuel Scarpino - a network scientist who studies infectious diseases at Northeastern University in Boston. “Even 70% effectiveness would be amazing, but still there could be a substantial amount of virus spread that would make it a lot harder to break transmission chains”.

Only if vaccines block transmission, and they remain effective against newer variants of the virus, might it be possible to eliminate the virus in vaccinated populations. Vaccinated individuals will be able to protect those who are not, therefore contributing to herd immunity. “The herd immunity threshold, if ever we’ll be there, is not a ‘we’re safe’ threshold, it’s a ‘we’re safer’ threshold” Scarpino stresses.

Stefan Flasche -  a vaccine epidemiologist at the London School of Hygiene & Tropical Medicine - reflects on the spectrum of COVID-19 data acquired so far. “Reaching herd immunity through vaccines alone is going to be rather unlikely” he asserts, “so we need to think of how we can live with the virus”. According to a model developed by Alexandra Hogan and other researchers at the Imperial College of London, UK, to reach herd immunity, a vaccine 90% effective in preventing virus transmission should be administrated to 55% of the population while maintaining basic measures of prevention and social distancing (face masks, home working). 67% of the population should be vaccinated without complementary measures for prevention. Of course this would be temporary, considering the permanence of antibodies after infection or vaccines and the effectiveness of acquired immunity against new variants.

However, even 55% of vaccine coverage seems challenging in many countries. Beyond the expected difficulties in developing nations, vaccine roll-out  has been less than smooth in wealthier regions of Europe, largely brought about by issues regarding supply and delivery policies. A comparison of vaccine roll-out in a selection of countries around the world highlight the dramatic disparity of vaccine distribution.

“I guess COVID will be eliminated from some countries, but with a continuing - and maybe seasonal - risk of reintroduction from places where vaccine coverage and public-health measures have not been good enough”, says Christopher Dye, epidemiologist at the University of Oxford, UK. The scientific community, continue to warn governments about the importance of an ‘altruistic plan’ for vaccine distribution in poorer nations. Not only because vaccinating the world is a moral obligation, but also because as a global community, the virus will continue to arrive from other countries, acting as comfortable reservoirs for new variants. “The virus will stick around if parts of the world don’t get vaccinated”, says Jeffrey Shaman, an infectious-disease researcher at Columbia University in New York City.

Uneven vaccine distribution would be the third main factor sustaining SARS-CoV-2 circulation if it became endemic, according to a group of scientists interviewed by Nature, after immune escape due to new variants and the decline of immunity over time.

Reasons for vaccine inequity are diverse. Some limitations to vaccine distribution in middle to low-income countries are intrinsic such as inadequate health care systems and the unavailability of a strict cold chain necessary for storage of some vaccines.

Important issues in developed countries reveal the fallibility of a broader vision. For most of the world there is an insufficient supply of the vaccine, and with a current vaccination rate of 6.7 million doses per day, it will take approximately 4.6 years to reach herd immunity (70 to 85% of the whole population receiving a double dose of vaccine).

This seems a realistic prediction should vaccines continue to be effective against emerging variants and roll-out is fast enough to prevent a wane in immunity. There are glaring implications for these issues and the fear of poor supply and insufficient roll-out is driving the race to ‘vaccine nationalism’, creating a gap in ‘vaccine equity’.

Inequalities in vaccination will expose the injustice of the global health and economy, and corporate profiteering, where vaccines and essential medications are regarded as a market commodity rather than a public good. The G7 nations, with the United States, have implemented the COVID-19 Vaccines Global Access (COVAX) program, to deliver vaccines to at least 20% of the population in participating middle and low income countries by the end of 2021, but this funding alone remains inadequate.

India, a main vaccine provider for COVAX, is dealing with a surge of infections and is suspending the exportation of vaccines in favor of national distribution. Patent related issues have caused further pain, denying the possibility of local production in middle and low income countries. A significant part of the scientific community, with the Indian and South African governments, supported by more than 90 countries, are pressing on the World Trade Organization for the temporary suspension of pharmaceutical patent protection. This move would reduce costs of manufacturing vaccines globally.

Although COVID-19 vaccines provide a pathway out of the pandemic, scientific, political and economic  injustices prevail, widening the chasm of vaccine inequality. As Ursula von der Leyen, president of the EU Commission, recently explained: “A global pandemic requires a world effort to end it - none of us will be safe until everyone is safe”.

Migraines: a point on mechanism-based and disease-specific therapeutics

Reproductive Medicine in the pandemic: the burden of COVID-19 on fertility treatments

The field of Reproductive Medicine saw many plans put on hold in the wake of Covid-19.
END_OF_DOCUMENT_TOKEN_TO_BE_REPLACED

Whether you have any queries about our activities, our approach or anything else, our team is happy to answer all your questions.

Get the latest from Med-Ex Learning

We keep our International network of Health Care Professionals and Partners informed about the best, and latest, Professional Development news, events and opportunities.